Our journey through Central America was about to begin, and whilst camping just outside of San Diego the dreaded border crossing into Mexico was looming over us like a dark cloud. Through out the west coast of America countless people had warned us about the dangers of the surrounding towns. Neither of us knew what to expect. Carrying two laptops, an SLR camera, Sat Nav equipment, and various other expensive electronic devices, we decided this wasn’t a day to be wearing the Go Pro.

On Monday the 24th September we set the alarm for 6.15am, packed up camp and hit the road by 7. Our plan was to cross into Mexico at Tijuana and head straight down the Baja peninsula. A quick google search didn’t exactly make me feel any better: “Tijuana is well known for being the birthplace and base of the Tijuana Cartel, with a high level of violent crime related to gang violence, in part derived from the Mexican drug war and human trafficking”. Neverthless, there was no turning back now, and we are both well aware that this kind of activity is often over-hyped by the media.

On route we stopped at a bank to withdraw some dollars. With little idea of what lay ahead, and not knowing when we would next have the opportunity to source an ATM, we decided to each carry $600 dollars and load up on fuel. Paranoid about being mugged I cunningly stashed $400 inside my boot, $160 in my motorcycle jacket, and $40 in my wallet for any potential bribes. Unsurprisingly Pete seemed a little more careless and wedged the whole lot in his money belt, tucked in his pocket.

Much to my amazement, upon reaching the border there was no delay, and we didn’t even have to stop to show our passports! There was not even a luggage check as we were casualy waved through by an armed official. This is clearly not the process when heading in the opposite driection, evident by a huge queue at 8am. Directly after the border we pulled into a layby with various tourist offices. Neither of us were particularly impressed with the look of these make shift shacks, so we made a decision to push on a little further with the hope of finding a more legit looking operation. When entering Mexico it is entirely your responsibility to purchase a tourist visa and motor insurance. At this particular border corssing there is no-one to guide you or make sure you have the necessary paperwork for travelling through the country.

Needless to say before long we found ourselves on route to Ensenada, having seemingly missed our chance to organise the required documentation. It was a tense time over the intercom as we discussed the option of turning around, and feeling tired added to my anxiety. Everyone had told us “don’t stop, just keep riding”, and here we were looking for the next availabale opportunity to do a u-turn and fight our way through the chaotic rush hour traffic. Fortunately we narrowly avoided the queue heading back into the States, and finally found the vehicle ‘Temporary Importation Office’. Thankfully with Petes Spanish skills we were able to fumble our way through the process, each paying a $300 deposit for the bike, a $50 admin fee, and $24 for a tourist visa. Struggling to find somehwere to buy insurance, we located the nearest McDonalds and used their wi-fi to organise a policy online through a company called ‘Discover Baja Club’, costing us another $110 each. A stressful and expensive morning, but a very nice breakfast.

The change in scenery as you cross the border is incredible. Suddenly you have landed in a developing 3rd world country, with many rough looking cars, makeshift houses, hectic traffic and street vendors. Heading directly east towards Ensenada, the road follows a huge border fence, offset by a steep embankment and then a deep valley. This makes for quite a dramatic view, especially with the eerie morning mist.

The ride towards El Rosario was fairly uneventful, and soon the weather became so hot that riding in just a t-shirt was the only option. This makes for a cracking riding tan, and the trademark two-tone arm of an adventure rider. Punta Baja, a small fishing village on the west coast, recommended by Mike Parise during our meeting in Venice, was the planned destination for our first night in Mexico.

Reaching this remote spot was a fairly tricky ride through some deep sand and muddy pools, and soon made us wonder whether we had time to risk any off-road routes whilst travelling down the Baja. It seemed a shame to stick to the highways, but with 10 countries still to cover, the Panama crossing, less than 3 months to complete the trip, and news of Hurricane Miriam coming in from the Pacific, we reluctantly agreed to stick to the tarmac from here on. In any case, we’d had our fair share of tackling deep sand in Mongolia. 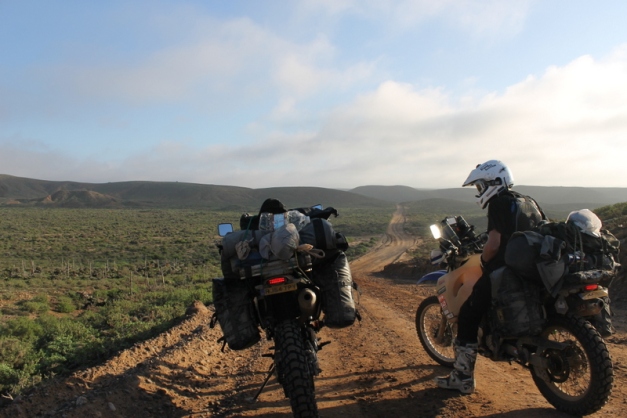 Highway 1 runs from top to bottom of the Baja, and besides a few boring stretches many parts are without doubt some of the best roads I have ever ridden. The surface quality is generally excellent, and sections of tight twisty bends feel more like a race track with white painted curbs guiding you from apex to apex. The Mefo Explorers we had fitted in Oceanside certainly proved a great road tyre, giving plenty of grip and confidence when leaning into a corner. Some of the scenery is spectacular, with huge boulder formations, and vast hills of sand and dry earth that stretch for miles with little sign of life besides desert Cacti.

Although now ‘only’ a tropical storm, 40km outside of La Paz Hurricane Miriam hit hard. The sky turned a dark menacing grey, almost black, and shortly after a military check point the heavens opened.

A flash flood formed deep rivers crossing the road, and we had no option but to wait for the rain to ease and the water levels to drop. Despite being completely drenched, it was funny to watch family cars attempt to drive through the deep streams, only to get stuck in the middle, having to then open their doors and push the car out! It was amazing to see how quickly a tropical flash flood could disable the road network, and we were both glad not to have taken an off-road route! Despite the floods we pushed on as soon as we could, eager to reach La Paz before it got any worse.

Upon arriving in La Paz, the final destination before catching the Baja ferry across to the mainland, we stumbled across Dave, a fellow adventure rider on a yet another BMW 800 GS kitted up to the max. Dave is 65, retired, and on a solo mission from Canada to Argentina. Brave, or Stupid? Either way an incredible character and a top bloke! Carrying more luggage than a local minibus, he was in admiration of our light load and tidy pack up. He stood there and watched as we unloaded into the hotel, shaking his head saying “I’ve got to give it to you boys, the pack up is an art, one that you’ve certainly mastered”. Despite having ditched his camping gear and having large hard panniers, his bike was fully loaded. Pete and I never did work out what he was carrying, although it soon became clear he wasn’t shy of collecting a souvenir or two along the way. By the end of his trip I’m guessing his bike will look more like a world tour Christmas tree.

On one particular ride Dave was in his usual position at the back, acting as the Tough Miles sweeper. Upon approaching a small village Pete and I spotted a copper up ahead, so waited in line with the rest of the traffic. Dave on the other hand swerved to the inside and blasted straight up the verge directly towards the policeman! God knows how he got away with that one, but from there on we named the old boy ‘MadDog Dave’. A title he was more than happy to adopt even on his own blog! Little did we know that MadDog would become our new riding partner from La Paz, Mexico, to the border of Guatemala. His surprising past and mis-spent youth travelling the world as a hippie made for some interesting stories, and we shared many enjoyable evenings discussing our plans over dinner.

After one night in La Paz, obviously treating ourselves to a few beers, we didn’t waste any time and managed to book ourselves onto the next ferry over to Mazatlan. Leaving this to the last minute meant there were no cabins left, but we were grateful to even get a ticket. The crossing was expected to take 16 hours, but due to unfavourable weather conditions the ship was unable to enter the dock as scheduled, resulting in an 8 hour delay out at sea. Things soon got worse, as shortly after settling into our designated seats MadDog decided to remove his riding boots, and within minutes the smell cleared the room, with people at the back even spraying cans of deodrant. I retreated to the canteen and spent the night sleeping on the deck, using my hoody as a blanket and a travel guide as a pillow. Despite a rough night and very little sleep, in the morning we found ourselves sinking a few of the good ones with two Irish lads named James and Colly, placing bets on how long we would be stuck on this stinking ferry!

After finally managing to disembark, it was a great relief to see the bikes were still upright, and within minutes we were checked in to the nearest hotel. The evening was young, so that night we hit the main plaza for a skin full with the Irish boys and another guy named Stither. Stither is a small Indian lad riding an air-cooled Suzuki 250cc, also heading towards South America. Drinking litre glasses of the local beer and sinking copious amounts of tequila shots soon had James and Colly tearing up the dancefloor, with some hilarious moves seeming to attract a lot of attention from the locals. It would have been fun to spend some more time with these guys, but the Tough Miles schedule is tight, so despite a savage hangover Pete and I loaded the bikes whilst dripping in sweat and hit the road the following morning.

With only 2 months left and 6 countries to cover we really need your help to reach our fund raising target, so please if you are enjoying our blog and can spare a few pennies, click here to donate towards our Just Giving Cancer Research page. We really appreciate all the support.