Day 94 of the trip. Having ridden through Europe, Russia, Mongolia and South Korea it was finally time for Tough Miles to hit up the USA. With the bikes onboard a container ship somewhere in the middle of the Pacific Ocean, Pete and I took a flight from Seoul to Seattle. The plane left South Korea on Monday 23rd July at 12.40pm, and after a short stop in Tokyo, where Pete got to experience his first Japanese high-tech toilet seat, we landed in Seattle at 9.40am on the same day. It felt great to have gained some time for a change!

Once safely back on the ground we decided to stay seated and wait for everyone else to disembark before us. Surprisingly this great decision meant we found ourselves at the very back of a lengthy customs queue, nice. When the time finally came for our interrogation, it seemed I picked the wrong desk, a typical stern jobs worth, and it went something like this……

Where have you come from?: England, I mean South Korea
Where are you going?: That’s a good question. I began explaining that at first we would travel up to Alaska, and then back down to Argentina. He looked at me like I was crazy.
How long will you be in the USA? Not entirely sure
Where are you staying? Hotel Hotel.
No, WHERE are you staying? Seriously, the hostel we have booked is actually called ‘Hotel Hotel’.
Can I see your reservation?: No, not unless you have the internet. We haven’t printed it.
Do you have a job?: Yes, I am an Engineer for McLaren F1 Team.

He didn’t even know what Formula 1 was. At that point it was obvious that the F1 line wouldn’t work out here. Despite the flaky answers he stamped my passport and let me through, at which point we jumped on a bus and headed to our hostel in Fremont.

Fremont is a small neighbourhood in North Seattle, known as the self-proclaimed Centre of the Universe. It has a young quirky vibe, with lots of pubs and live music. It just so happened that the hostel was directly above an Irish pub called The Dubliner, so despite neither of us having slept the previous night, we soon found ourselves firmly planted in the boozer for a well-deserved afternoon session. Before long we became well-frequented with the bar staff and locals, with our new mate Curt doing most of the introductions. 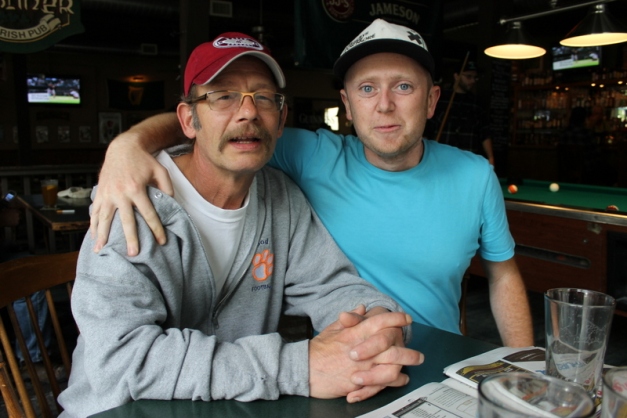 The hostel was modern and clean, but it’s location made it impossible to catch up on sleep. The Irish pub below was banging with karaoke almost every night until 2am, making the metal lockers inside our 8-bed dorm literally shake. In addition to the noise, the heat given off from the pub kitchen made it unbearably hot. It became obvious that our wait in Seattle was going to be, ummmm, messy. Having visited almost every bar in Fremont, one particular venue called Nectar really suited our needs. The walls were covered in Brixton stickers, and during happy hour, 3 till 8, pitchers of beer came in at a very reasonable $5! And it was here that we recruited our Seattle skipper…….meet Sam, “You Bet”

Despite a hectic working schedule, and living on the other side of town, nothing was too much trouble for Sam. We were driven around the city to go kayaking, long boarding, chill on various beaches and visit the best places to drink during the night. Suddenly I felt like I was finally on a holiday! Not surprisingly her parents seemed a little shocked when they arrived back early from a weekend away camping and found two English men sleeping in their house. Sam quickly explained our story whilst Pete and I hastily packed up our things and made a dash for the back door. Thankfully Juli and Bob were as chilled as Sam, and before long we were sat sharing stories and made to feel right at home. Our time in Seattle wouldn’t have been the same without Sam, she really is a ‘little legend’ who won’t be forgotten.

Another bonus of our time spent in Fremont was the chance to catch up with Petes buddy Fajer. He and his wife Alison had just got married and were on a road-trip honeymoon travelling up the coast with friends. Fajer is a great guy, and after a ridiculous amount of time spent exploring the world he has now set up a successful travel guide company, escape-travels.com. Pete and Fajer met whilst travelling South America, so they have plenty of entertaining stories. We certainly hope to see Fajer again at some point on this trip, with more time for a proper knees-up.

One evening, whilst drinking in our hostel, we met an eccentric Italian guy named Simone. He was on an epic motorcycle trip from Argentina to Alaska, and by the time we met him in Seattle he had already broken the world record for the longest distance travelled on a bike smaller than 50cc. He was riding a 49cc Beta trail bike, which funnily enough was now lacking a side stand, similar to the last Italian, Enrique, we met in Ulaanbaatar. In true Italian style the bike was parked on the pavement, lent up against a lamp-post with a parking ticket stuck to the seat. Some of his stories were pretty funny, one time with a blown head gasket he managed a bodge-job roadside repair, having to use Gator Aid for radiator fluid! At this stage of the trip the bike was really struggling, and it had me in stitches watching him leave fully loaded with luggage. Even with full throttle the poor thing could barely make it up the hill, and the maximum speed was now apparently only 30mph. It left a trail of smoke and sounded like a constricted hair dryer. Must have been a long ride up to Fairbanks! You can read more about his story here.

On Wednesday 1st August we received the long-awaited news that the ship had arrived, and that our bikes should be ready for collection on Friday 3rd. Sticking to the plan we headed down to the port of Tacoma on Thursday evening, excited by the prospect of being back on the bikes the following day. The next morning things took a turn for the worse. Shortly after arriving at the US customs office we were told we were missing some crucial paperwork. In order to obtain the nonresident exemption letter we would have to phone the EPA office and request details on how to apply. Our hearts sunk as they explained this form could take 7 to 14 working days to be processed, and we began discussing whether we would still have time to ride up to Alaska before heading south.

Having lost both our phones in Russia, and without a means of transport, making the necessary arrangements for further paperwork and getting around the port wasn’t easy. We found ourselves walking miles in the blistering sunshine, and stopping outside a random doctors surgery to use their free wi-fi for calls on Skype. Sound Brokerage was the agent we used for organising an escort into the dock yard. When they heard the bad news Gwen kindly drove us to their office to assist getting the required paperwork underway. It was Friday afternoon, so little progress could be made before the weekend.

Both feeling absolutely gutted, we stood alone in the port waiting for a lift to the bus stop. At this point a random guy pulled up in his car and said “Are you those 2 english bikers, how has your day been?”. In a dis-heartened tone I replied “Yes we are. We’ve had a sh*t day. Our bikes are being held by customs due to some missing paperwork, and the length of the delay could really affect our trip. I don’t suppose you can help?” Little did I know that this guy, named Curt Stoner, would turn out to be our saviour! He gave me his business card and said “Email me, I’ll see what I can do over the weekend, maybe Monday”.

Knowing there was little chance of getting our bikes anytime soon, the following Monday we decided to take a bus to Vancouver. Amazingly, whilst waiting to board the bus, I received an email on my new phone, which I had only just bought, requesting us to come to the Customs Office as soon as possible. Thankfully we managed to get a refund for our tickets to Vancouver and jumped on the next bus down to Tacoma. Within 1 hour of arriving at the port we had the stamp we needed and arranged an escort to collect the bikes.

Without knowing how the bikes were loaded or strapped to the boat, it was a great relief to see both bikes were at least still in one-piece, although they looked and felt rough. Petes bike struggled to start and mine kept cutting out when stopping at lights. It was nice to know we only had a short ride to Seattle before the bikes would get some TLC from the guys at Aurora Suzuki.

Almost all of our luggage was left on the bikes during transit, and unfortunately our last pack up, almost 1 month ago, was a wet one. The smell of opening our top bag was revolting, and our damp motorcycle gear smelt worst than a wet dog. My boots had even developed some light fluff around the top, it would appear a small eco-system had begun growing inside. Although getting dressed for the ride ahead was tough, we couldn’t stop grinning at the fact we had our bikes back so soon. The ride to Alaska was back on, and that evening we rode to Seattle.

The following morning, Tuesday 7th August, we headed to the shop first thing to discuss what we could get done. Darrell, the service manager, is a top bloke and very on the ball. Aurora Suzuki is extremely popular, and there is always a long queue of bikes waiting to be worked on, so turning up unexpected and hoping to be squeezed in that day was a lot to ask. Fortunately for us, Aurora Suzuki are renowned for their excellent customer service, and they weren’t about to let us down. Much to our amazement, Darrell immediately cleared space for our bikes, and we set about working as a team to bring them back to life. By the end of play the bikes had been fully serviced, including new tyres, wheel bearings and chains. It was a very busy day, but the boys at Aurora absolutely smashed it, and Pete and I couldn’t be more grateful for their efforts. It was a shame not to share a beer with them after work, but we knew we would be back on our way down, and we couldn’t wait to get going.

Despite our and Darrell’s best efforts to keep costs to a minimum, with all the parts and labour, unsurprisingly we still managed to rack up a fairly substantial bill. Thankfully we have the support of Suzuki GB, where the guys have done an amazing job at liasing with ASMC (American Suzuki Motor Corporation) to organise paying for all the work. Pete and I find it hard to believe the support Tough Miles is receiving from those guys in the UK. The effort certain individuals have put in towards helping us on the other side of the world is remarkable, and we certainly don’t take it for granted.

That evening Tough Miles hit the road and headed for Vancouver.

A huge thanks again to those that have already donated. We’re slowly getting there but still require a lot of support to reach our target for Cancer Research. Please click here if you can help us hit the big number.